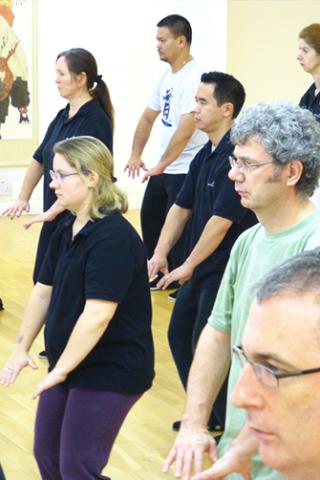 This is a particular style of Chi Kung often used in the practice of Tai Chi Chuan. This is a unique set of Chinese ancients exercises based on Taoist principles of harmony, simplicity and natural order. The goal of Zhang Zhuang is to:

the flow of Chi energy in the body, relax the mind, strengthen and improve health. Nonbreux used by practitioners of Tai Chi, this particular set of exercises also use or apply independent manner and is generally practiced by the Chinese in parks or gardens.Just as Tai Chi Chuan can be practiced by people of all ages, regardless of their lifestyle or their health. In Chinese, Zhan Zhuang means "standing like a pole or as a tree." Zhan Zhuang Chi Kung to consist of a series of standing postures that involve no apparent external movement. Some under estimate the simplicity of this exercise because of its static appearance. However those who have had first experience of Zhan Zhuang will acknowledge that like Tai Chi Chuan, it is deceptively demanding physically and deeply absorbing mentally. With consistent practice of this system we stimulate and concentrate Chi so that it can be applied in different ways.

Tai Chi Chuan is one method in which Chi can be applied; however, this energy can also directly be used for spiritual awareness and healing.

Zhan Zhuang and hence Chi bring changes to both body and mind. Just as Tai Chi Chuan can be used as a mode of treatment for many illnesses, Zhan Zhuang and Chi cultivation is also understood to abate illness, maintain good health and even heal others.