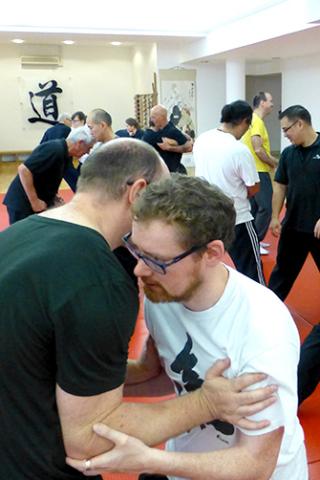 Often Tai Chi Chuan practitioners prefer to practice on their own with minimal physical contact with others, in the belief that if they train long and diligent enough, they will be able to gain the awesome power that is available through the traditional art. Unfortunately, this is a mistaken view. A traditional method requires a traditional approach, and whilst individual practice is important, it forms only one aspect of Tai Chi Chuan training. Traditional Tai Chi Chuan requires participation in paired practice (Gau Sau) to enable you to polish your Tai Chi skills.

For a practitioner to be able to develop the acumen, and harvest the opportunities that are abundant in the art, there is a prerequisite that it must include the exchange of hands or Gau Sau. By doing this, will enable you to work with different people of different levels to help you to gain experience and refine and enhance your Tai Chi Chuan ability. Gau Sau training can be something as simple as posture testing but can also be developed in stages to include Push Hands, Sensitivity, Ta Lu, and martial applications.  What is often forgotten is that the path of Tai Chi Chuan can only be negotiated through experiential learning. Only by working with people, will you begin to feel and discover the various aspects of Tai Chi Chuan talked about by masters.It is often said that a teacher can only guide you on a journey and it is ultimately the practitioner that has to travel along its path. Part of this process is to feel what is not possible to adequately describe in words and only in doing so will you be able to harmonise the mind,body and spirit.  Too often have

practitioners over intellectualised Tai Chi Chuan and have subsequently lost their way. By being continually grounded and incorporating Gau Sau as part of your Tai Chi Chuan training, a practitioner has the potential ability to realize capabilities beyond that of known limitations.