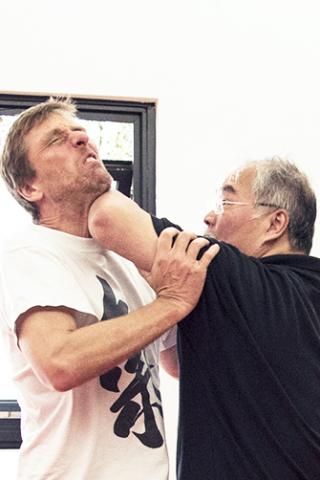 Hidden within every Tai Chi movement is a logical and practical combat application.  It is an effective potent internal kung fu system.

Tai Chi Chuan’s origin stems from the martial arts and is well known as effective potent internal Kung Fu or martial arts system. It is well recognised in the East for its potent martial abilities.

Nowadays, Tai Chi is often regarded as only a health exercise in the West. This is a mistaken view. There have been many misconceptions about the practical use of Tai Chi Chuan for self-defence. It was by combining the theories of Chinese medicine and martial arts that the importance of training both the mind and the body together with the spirit was recognised, and hence a potent system for combat developed. Hidden within every Tai Chi movement is a logical and practical combat application.

Tai Chi Chuan is an internal Kung Fu or martial art and hence very different to those more established martial arts found in the West. The art not only cultivates the internal energy, chi, for health but also utilises chi for self-defence and it is this emphasis that makes Tai Chi Chuan, an internal Kung Fu system. Thus those who preach a traditional method of teaching should also be able to demonstrate that Tai Chi Chuan is not simply aimless arm waving, but that each movement can be effectively used as a potent form of self-defence. If any movement cannot be used in combat then clearly the movement is incorrect.

Tai Chi Chuan self-defence requires firm dedication and persistent correct practice only with the help of a knowledgeable teacher who can demonstrate these refined subtleties. Both men and women can achieve equal proficiency, as expertise is not dependent on size, physical strength or speed.

At a high level, Tai Chi Chuan has the ability to use chi in self-defence applications to simultaneously achieve the apparent paradox of effortlessness and tremendous power. The subtlety of such expertise cannot be adequately described… only felt. Many martial arts attempt to transcend the physical but few achieve it.