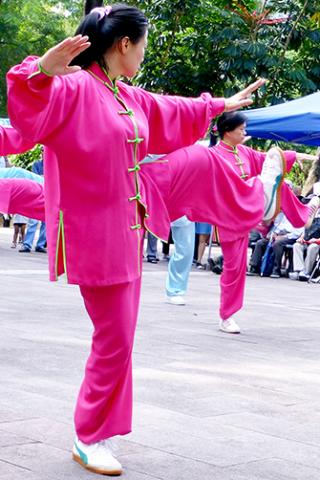 Many books and articles have been written about Tai Chi Chuan. In this section we will address some unanswered questions, as well as share our knowledge on this ancient Chinese art of traditional Tai Chi Chuan.

In all form of learning be it practical or intellectual, we always start off first with acquiring the basics. This is also true for learning traditional Tai Chi Chuan too. The basics are the most important element that help us establish a solid base or foundation from which we can grow and develop. A good understanding of the basic skills of the ancient art enable us to build our skill, one level at a time, so that one could finally achieve mastery and also be able to develop the art further in a constructive process. This process of approach ensures that we can truly realise the full potential of what traditional Tai Chi Chuan can offer us - mind, body and spirit.

A poor understanding and grasp of the basics yield weak foundation with minimal or no benefits. You will never be able to progress in your Tai Chi Chuan no matter how long you have been practicing, just like filing a bucket full of holes with water. Despite all the effort and time spend it is useless as the bucket is unable to retain water. Only by mending these holes can one uses the bucket again. A true understanding of the Tai Chi Chuan basics, not only make it effective but also safe to practice by people by all ages, health and fitness. Hence, a good understanding of the basics of traditional Tai Chi Chuan will get you started on the right path so that you are able to

facilitate the flow, sinking and concentration of Qì at the Dān Tián point. However, you still have to be committed to put in the amount of work with lots of practice and time to achieve the goal as the Chinese saying goes, “Màn Gòng Chū Xì Huò (慢工出細貨)” when translated to mean, “Slow work produces detail and quality goods”.

In traditional Tai Chi Chuan, there are three main aspects to learning this ancient Chinese art system, each equally important and interlinked with each other (just click link for more information) :