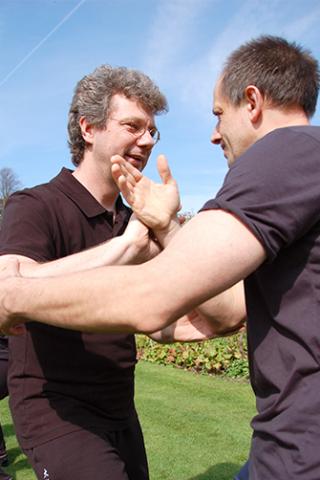 Tui Sau literally translates to "Push Hands" is the third and final triad of traditional Tai Chi Chuan. Tui Sau is a fluid and rhythmic set of hand movements and body that is convenient to both. Both practitioners practicing in partnership. He insists on using the Chi rather than on its expansion and movement in the body. Tui Sau is based on the forms of Tai Chi, using many of his movements and positions. Indeed, the principles and concepts of the forms can be extended to Tui Sau. There are many parallels that can be drawn between the Tui Sau and forms of Tai Chi. Both are fluid in their actions, both focus on the movement of energy, and share the same stability of motion and strength of the structure. But what sets them apart is that the Tui Sau asks that the work done in cooperation with other persone to gain experience by applying the principles of Tai Chi. Tui Sau is Tai Chi Chuan and applied the principles of Tai Chi "put into action" that the practice of the only forms do not achieve. Often the teachers will teach Tui Sau that after teaching forms, principles and concepts that lie behind Tai Chi Chuan. Once you have an understanding of their fundamentals, Tui Sau can then be taught, so that time is spent fruitfully on their usage and application. Tui Sau is primarily a dynamic exercise between two people who face each other. There are many types which can range from a single-handed sequence of repeated movements to a full-length two man set. Each type of Tui Sau has a particular use and function. Although little seen in public, Tui Sau is important, and forms a large part of Tai Chi practice.

Before we start Tui Sau, it is understood that it demands interaction, co-operation and trust between the two practitioners. It also requires a willingness to concede part of yourself to your partner in order to gain its full benefits. Tui Sau’s most superficial aspect involves one practitioner constantly testing the other’s structure and stability by applying pressure in different directions. By being pushed away by our partner heralds a weakness in our own posture and represents a flaw in the application of the Tai Chi principles within that posture. We can therefore reflect upon the mistakes found by our partner, and correct them as necessary. Tui Sau is thus a process that encourages and reinforces the persistent correct practice of Tai Chi Chuan.

However, through regular practice of Tui Sau, something quite extraordinary develops. Consistent correct practice allows the skin on the hands, arms and even all over the body to acquire sensitivity and receptivity to touch. With heightened senses you become more aware of yourself and others. You develop sensitivity to your partner’s forces and intentions during Tui Sau. Your reactions also speed as you rely less on sight and more on touch to anticipate your partner’s movements. You also slowly acquire the ability to project your energy directly through your partner, using it to push them away on contact. The Chinese believe that all these abilities and more are due to the development of energies (or ‘ging’) brought about by different methods of applying chi. Thus Tui Sau’s higher aspects involve the application of Chi through various methods in order to first recognise and then develop these energies.

- Teng Geng (Listening energy): the ability to feel the direction of push on contact

- Nien Geng (Adhering energy): the ability to stick and keep in contact with your partner

- Far Geng (Neutralising energy): the ability to neutralise the force directed towards you by your partner

- Fa Geng (Explosive energy): the ability to project your own Chi, and throw your partner away in any direction

However, using these energies is not restricted to Tui Sau alone, but in fact has a much wider implication. By using these energies derived from chi application for combat makes Tai Chi self defence unique within the martial arts world. Integrating the various forms of energies or ‘Geng Likk’ creates a potent form of martial art that contains within it a powerful force that is also sensitive to the opponent. This is Tai Chi Chuan self defence. Tui Sau then, is a method that is multi-layered whose essence is to develop the application of chi so that ultimately it can be used for self-defence.