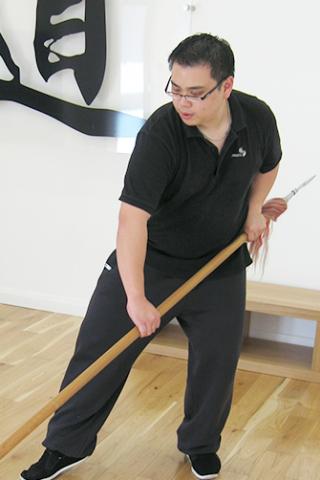 Weapons use and their forms have always been held in high esteem by traditional martial arts practitioners, often regarded as echelons only achievable by seniors. Although this is not universally true, there is a prerequisite that the practitioner has an understanding and has acquired skill in the hand forms before them, particularly their use in application. Without a solid grasp of the fundamental hand forms what is extrapolated into the weapons forms is merely an empty shell that forms little basis in the context of true martial application.

This phenomenon is true also in Tai Chi Chuan. So then to have a real comprehension of the Tai Chi Chuan weapons, the roots must first be grounded in the principles and applications of traditional hand forms. Tai Chi Chuan is unique in its appeal. It gains support from those with an extensive martial background but is also adopted by those who are in search for its health and spiritual benefits. It has therefore been argued that because of it successful transfer across ‘faction’ boundaries, this has led to its teachers to emphasise only on its own interest group. The danger is then being taught simply superficial movement without an understanding of the true concepts behind them. More often than not, what is endangered is Tai Chi Chuan’s traditional martial essence. If these principles and applications are glossed over in hand forms then subsequent weapons forms simply are of little traditional (and in particular martial) substance. It is hard enough trying to find Tai Chi Chuan taught as a complete discipline using an holistic approach, but it is only those that adopt this method will the fruits of weapons forms be bared.

Tai Chi Chuan self-defence and martial application is more than simply choreographed block and attack type movements. Instead Tai Chi Chuan assumes that all attacks are different and is organic in its approach. Tai Chi Chuan uses sensitivity and feeling to simultaneously overcome an advance and enter into the opponent to attack. It therefore has the ability to be adaptable and can change with the flow of an opponent’s advance. This ability to ‘stick’ coupled with the intensity of energy that is Chi, allows a potent martial art to be achieved – namely the ‘Supreme Ultimate Fist’ or Tai Chi Chuan.